Full Name
Ravi Tewari
Job Title
Group Chief Executive Officer
Company
Guardian Group
Bio
Mr. Ravi Tewari is Group CEO of the Guardian Group, one of the largest financial services organisations that operates across the English and Dutch Caribbean.
An actuary by profession, he has twenty-five (25) years of experience in the insurance industry. He began his career in actuarial consulting and worked for several insurance clients throughout the Caribbean. On joining Guardian in 1998, he worked as a Valuation Actuary, where he played a pivotal role in several key acquisition projects that drove the rapid expansion of the Guardian Group.
In 2005 he was appointed as President of Guardian Life of the Caribbean; in 2011 as Head of the Life Line of Business for the Group; and in 2014 he was appointed Group CEO of the Guardian Group.
Mr. Tewari holds directorships on the Guardian Holdings Board, Guardian Life of the Caribbean and other Group subsidiaries’ Boards, the Advanced Cardiovascular Institute, and the Trinidad and Tobago Citizens Alliance Against Crime.
Speaking At
Tech as a Force for Good & Digital ROI 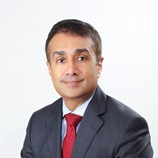